I've been a resident of the 42nd ward for more than 15 years. It's a wonderful place to live, work and raise a family. But the City of Chicago is changing. Violent crime has had a terrible impact on the 42nd ward neighborhoods of Streeterville, Gold Coast,  River North, Near West Loop, New East Side, Fulton River District and the Loop. I've been a twice-victim of violent crime myself and resident concerns about violent assaults, carjackings and robberies are very real.

Please write-in William J. Kelly for 42nd Ward Republican committeeman on March 17th and I will make sure the 42nd Ward has a real advocate - one that represents Republican voters. Together, we can make the 42nd Ward safe again and build a real Chicago Republican Party that can take on violent crime, wasteful spending and too-high taxes for no services. 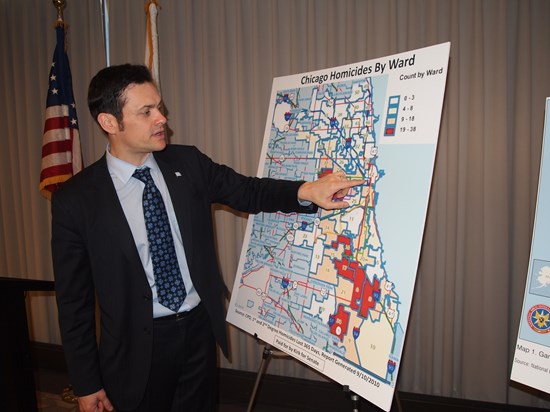 I've been a resident of Streeterville and the 42nd ward for more than 15 years and much has changed in those years. As a long-time resident, I am very concerned about the rise of violent crime in our neighborhoods. Violent carjackings, assaults, robberies and thefts are on the rise and residents don't feel safe anymore. No Chicago neighborhood is safe - not Streeterville, the Gold Coast, River North, Near West Loop, New East Side, Fulton River District and the Loop.

We need an tireless advocate for the 42nd ward. I would like to be your advocate and help make our neighborhoods safe again. Please write-in my name - William J. Kelly - for Republican 42nd ward committeeman on March 17th and I promise to work hard for you and for our neighborhoods.

Illinois, January 30, 2019 - A criminal complaint for filing a false police report and obstruction of justice has been filed against former Lake County Sheriff Mark Curran, now a Illinois candidate for U.S. Senate, based on statements made during Curran's videotaped jailhouse interview with Grayslake Police. The complaint was filed by Curran's former U.S. Senate opponent, Republican William J. Kelly.
Curran also filed counter charges against Kelly for criminal trespass, disorderly conduct, assault, and filing a false report. Finding no evidence to support Curran's spurious claims, the special prosecutor has declined to press charges against Kelly.
During his jailhouse interview, Curran was caught lying to investigators. He waived his Miranda rights but refused to sign a written statement, worrying that it would be subject to FOIA. In his police case narrative, Detective Warner determined "Upon reviewing the video (of the battery), I did not observe Dawn (Livengood) or anyone else ask William to leave the office prior to Mark grabbing William by the upper arms/shoulder area and pushing him toward the door," contradicting Curran and Livengood's claims. Another witness, Casey Cheblek, also confirmed Kelly's account.
Warner noted that based on the video file, "I observed Mark to turn his back on William no less than eight times which is a direct contradiction to Mark's statement that he was afraid to turn his back on William for fear of getting 'cold-cocked," indicating that Curran had no legal justification for committing a battery against Kelly.
Kelly also filed false police report and obstruction of justice charges against Ms. Livengood, the office manager for the Lake County Republicans Central Committee (LCRC).
Back in November, Curran committed a criminal battery against Kelly at the Lake County Republican office in Grayslake and the incident was captured on video.  Both Curran and Kelly had been both invited to speak before the LCRC. Despite the battery charge, Curran was endorsed by the LCRC anyway.
Kelly and Curran have long been at-odds over Curran's support for illegal immigration based on a heated debate in Lake County in 2013. See a timeline of Curran's history and positions here.
Detective Warner's full case narrative from the Village of Grayslake is available upon request.
Thursday, November 7, 2019 11:47 AM